Recuperation: the Recovery of a Keen Being

With the follow-ups that followed, I had several doctor appointments: the otorhinolaryngologist (the logician for the endoscopic adenectomy surgery), my primary care physician, the adrenalectomy surgeon, and my endocrinologist. Prior to the scheduled appointments, on two separate occasions, I was in contact with the physician on-call to find out what I should do about the abdominal discomfort I was suffering. After each physician went over the symptom "causes for emergency" checklist, I was advised to wait to hear back from someone from the adrenalectomy team and from the endocrinologist--and try to wait until the scheduled appointment. I did receive word to pickup a prescription for my stomach, and that I should have some blood work done for the surgeon and endocrinologist to review prior to seeing them.

The appointment with the otorhinolaryngologist was fine; I was healed from the adenectomy--no residual complications. The appointment with my primary care physician was fine as well; he provided me with some advice in health management. The appointment with my adrenalectomy surgeon proved to me that I am not a hypochondriac. After reviewing the lab results and consulting with my endocrinologist, the surgeon had me admitted to the hospital for additional testing and an x-ray of my stomach, which would conclusively determine whether or not my abdominal problems were a complication from the surgery (i.e. infection) or from the regimen of medicines prescribed to replace the hormones once produced by the adrenal glands and to counterbalance the effects (diabetes, osteoporosis, high blood pressure) caused by the toxic levels of cortisol (Cushings Disease).

After a few days in the hospital, the physicians concluded that my body was in cortisol withdrawal and was adjusting to the prescribed medications. Relieved that there were no complications from the surgery, I could focus on recuperation, recovery, and remaining loyal to my endocrinologist's recommendations--she, who reminded me that my brain was/is still "swimming in cortisol," which is being reduced gradually and needs to be closely monitored until the disease abates and hormone levels are normalized. Understood, however, my appetite had not increased, nor had my fulsome taste perception become less sapid.

Perniciousness aside, when I was admitted to the hospital, as I had before, I was asked if I had any religious beliefs that would become a factor regarding my medical treatment options. I claimed that I did not have any doctrine-based concerns. However, since having my adrenal glands removed, the effects on my physiological systems makes this layperson ponder this profundity affecting my psyche--a hypothesis: a glandular soul in conjunction with an ethical one? The futility taxing my natural brain, calling upon a non-existent gland to automate my immune system, now "naturalized," reminding me to take action or else my health would progressively deteriorate automatically. My will is exhausted.

This depression would pass within time, I was informed during my preoperative consult with the surgeon, who indirectly encouraged me to "keep the faith." In respite, I had been able to contrive two recipes. An espresso has invigorated my ability to contemplate the renewal of my vitality. 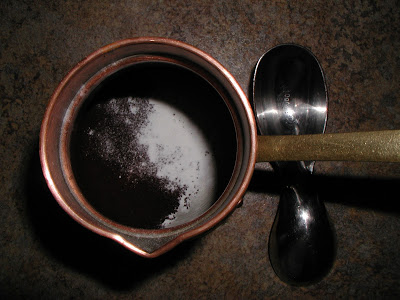